While gender-responsive Security Sector Reform (SSR) is increasingly recognised as being key to successful SSR programmes, women continue to be marginalised in post-conflict SSR programmes, particularly defence sector reform. By focussing on developments in Nepal, Sri Lanka, Kosovo and Colombia, this article (in the link below) explores the paradox of women’s marginalisation in defence sector reform and post-reform defence structures in places where women were active combatants during the preceding conflict. This article refers to examples of women’s engagement in combat to challenge some of the reasons given for women’s marginalisation, including reference to women’s skillset, aptitude and interests.

The article adopts a feminist institutionalist approach to show how SSR helps security sector institutions construct and reconstruct gender power relations, reinforce gendered dynamics of exclusion, and determine gendered outcomes. It concludes by drawing attention to the transformational potential of SSR to alter gender power relations, and thereby enhance the security of women and the sustainability of peacebuilding efforts.

Article: Gender and Defence Sector Reform: Problematising the Place of Women in Conflict-Affected Environments – Journal of Intervention and Statebuilding 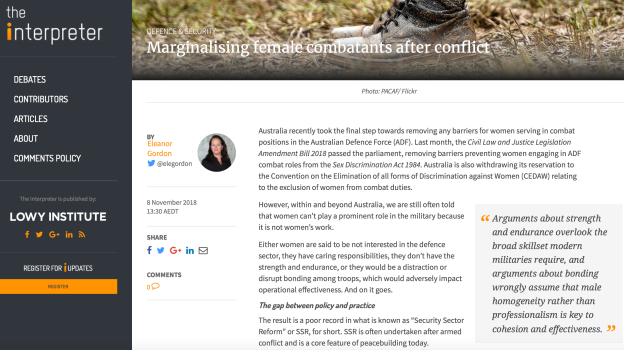