Political skills are frequently compared to chess-playing. However, it is the game of Go that comes closest to the art and craft of geopolitics. Go is a territorial game, where objective is to control more territory than the opponent. And the playground is big enough to allow performing poorly (or failing) in some areas but still winning the game by doing better on the board as a whole. Ukraine is the case in point.

Three years ago, on 18 March 2014, the self-proclaimed independent Republic of Crimea signed an accession agreement with Russia that resulted in forming new constituent entities within the Russian Federation. The agreement was signed two days after the citizens of Ukraine’s then Autonomous Republic of Crimea and city of Sevastopol voted to join the Russian Federation at the independence referendum (which was not recognized by the Ukrainian authorities). The move was (and still is) regarded in Russia as an historic act of “reunification”, while it was met with an outcry on the West and in the neighbouring countries, and was largely branded as the final act in “Russian annexation” of the Crimean peninsula (further to military occupation in February that created the conditions for the referendum).

For those observers who are familiar with historic background of the Russo-Ukrainian relations and their geopolitical context, it did not come as surprise though: the issue of Crimea (and especially the port of Sevastopol) and subsequent eastern Ukraine separatism are just another milestones on a long route of settling the relations between Russia and Ukraine in contemporary, post Soviet, history. Which itself is just a small section of a millennium long common history, with its numerous zigzags, highs and lows, infightings, controversies and moments of common pride (it is enough to remind that the Russian and Ukrainian statehood has started from Kievan Rus’ of 9-13th centuries; while Crimea becoming firmly part of the Russian Empire after the 1783 annexation and then changing hands in the course of the 20th century).

The irony of Russian geography is that, in spite of having a vast territory stretching from East Europe to the Far East, Russia is comparable to a land-locked country in terms of useful naval access to the world’s main theatres of action. That is why Crimean peninsula scores high in Russia’s national security strategy, and she cannot afford losing it. It is obvious that Crimea’s annexation was only an issue of time. The work in this direction started early in the post-Soviet times—already in the 1990s some Russian nationalist politicians were declared persona non grata, for meddling into Ukrainian internal affairs (under the pretext of protecting the interests of ethnic Russian or “Russian speaking” population).

Since the collapse of the Soviet Union, Russia and Ukraine were negotiating the division of fleet and military and naval bases inherited by the newly independent states. From 1997 Russia was leasing the military bases of Sevastopol port from Ukraine, as per Partition Treaty. For quite some time, the sides were using their bargaining chips (gas supply and transit from Russia vs. Sevastopol bases of Ukraine) within tolerable margins.

Things became complicated once the United States and the European Union backed pro-democracy opposition groups started challenging the established status quo. Even worse for Russia, once coming to power after the so-called “orange revolution” of 2004-05, they began openly threatening to discontinue the leasing (which was due to expire in 2017). The situation temporarily normalized when the pro-Russian president Viktor Yanukovych was installed in Kiev. The agreement was immediately renewed and extended for another twenty-five-year period until 2042 (known as the Kharkiv Accords).

However, the Euromaidan protests of the opposition forces in 2014 saw Yanukovych ousted, and that was a signal for the Russian military that the time has come for action. Russia simply could not allow this happening. Honestly speaking, no one (at least among actual or those aspiring to be great powers) would.

So where is Crimea now? The answer is simple and clear: Crimea is gone; forget it. It has quickly passed a grey zone (limbo, if you wish) of “no return—no further transformation” and has comfortably integrated into the Russian state. And it seems that, over time, everyone has accepted this stand of affairs.

No return means that there is no chance Crimea will be part of Ukraine ever again, given its strategic, even existential, importance to Russia: Crimean peninsula is the only place that hosts its Black Sea Fleet—one of very few outposts from where Russia can defend its southern borders and geopolitical interests in the region, as well as project its strategic offensive capabilities globally. Moreover, since the annexation Russia has deployed additional forces to strengthen its surface and sub-surface combatants and amphibious primary based in Sevastopol, Karantinnaya and Streletskaya Bays, as well as naval aviation and air defence located in nearby bases along with naval infantry.

On the other hand, there was a smallish chance that Crimea would be formally recognized as an independent state by other states and the UN any time soon. That meant no transformation into a fully fledged sovereign state; and declaring independence while being de jure part of Ukraine and de facto Russia’s satellite did not seem a feasible option, either. The only transformation from the grey zone practically justifiable (and the one that Russia did not hesitate undertaking) was integration—that is, Crimea becoming formally the part of Russian Federation. Therefore, for Russia (and by extension for all others) Crimea can be considered (at the very least, for the visible future) as fait accompli.

Eastern Ukraine: a prize no one dares to win

Eastern Ukraine, particularly people’s republics of Donetsk and Lugansk of the Donbass region (acronym for Donetsk [Coal] Basin), is following suit. The circumstances of Donbass are different from those of Crimea, but the destination is the same—into the grey zone where it becomes a low intensity irritant and a bargaining chip. The principal difference being that the Donbass entities are going to stay there at least in the immediate to medium term, if not indefinitely. There are reasons for that.

First comes the superiority of objectives. For Russia, the Donbass uprising has served as a supplement, to distract attention from Crimea and allow settling the primary issue (i.e., everyone to accept Crimea’s secession and integration, or annexation, even though without overwhelming formal recognition internationally) while creating a buffer zone and a constant irritant in Ukraine that will make the neighbor’s government vulnerable and more dependent on Kremlin, to extent necessary for keeping it on a safe distance from the meaningful, full-blown Euro-Atlantic integration.

Moreover, there is a principal difference between Crimea and Donbass in terms of conflict dynamics and political economy. The former was taken in a clinically performed operation and today is firmly controlled by Kremlin and does not seem to create any problems neither within its federal entity borders nor to its neighbours (I even read the reports in Russian media about how much Crimean Tatars, who initially were opposed to secession from Ukraine, come to “appreciate their newly obtained liberty”). For anyone raising their voice of concern (it still occasionally happens nowadays), the Russian Foreign Minister Sergey Lavrov has an immediate response pointing to Kosovo. Legalists may debate the nuances of course, but it hardly would affect the real situation on the ground.

This is not the case with Donbass and its two self-declared entities—Donetsk and Lugansk people’s republics. Political economy of the conflict here includes numerous non-state actors, ranging from separatist groups to anti-Russian paramilitary battalions with diverse ideologies and allegiance, and various gangs who proliferate from the chaos and lawlessness and thus are interested in sustaining the present situation rather than ending the war. They have seized control of many industrial sites and are engaged in all sorts of illicit production and smuggling activities as within the region so across the borders. 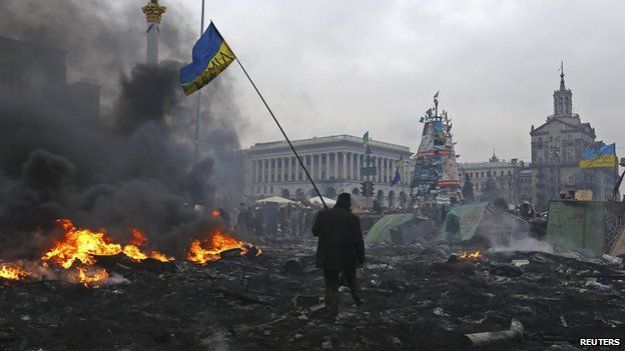 According to reports, separatists have seized control of steel mills, coal mines and other enterprises, and up until recent were trading with the government controlled territory.  In turn, paramilitary battalions (such as Azov, Aidar, Tornado), as revealed in international investigations, ignore the rule of law and “have been involved in widespread abuses, including abductions, unlawful detention, ill-treatment, theft, extortion, and possible executions.” Paradoxically, such groups may be of lesser headache in a low intensity conflict and lack of state control than in post-conflict situations when they play a destabilizing role and undermine the rehabilitation and state-building attempts of central authorities.

Next, Donbass is not of existential importance to Russia. Given the outdated infrastructure, degraded condition of coal mines and steel mills of the region (all demanding quite urgent and considerable investment with doubtful prospects of competitiveness), it does not represent such a great economic value to Ukraine either. The cost of physical rehabilitation is estimated in tens of billions dollars; who is going to pay for that?

To sum up, today neither Russia nor Ukraine has an appetite for fully embracing the Donbass, for it will come at prohibitive economic, social and political cost. The intricacy of Ukraine’s position is well summed in one of recent articles: “The good news is that Ukraine is prepared for all-out war with Russia; it is also prepared for and could cope with aid cutoffs from Washington and the end of sanctions. The bad news is that Kiev is thoroughly unprepared for the one scenario that could destroy Ukraine at little cost to Putin: Russia’s return of the Donbass.”

Power the aim, people not in equation

For the time being the strategic positioning of sides to the conflict over control of territories in Crimea and eastern Ukraine has been temporarily settled. “Temporarily” here may mean without meaningful change for decades to come, however. It appears that such a solution serves the interests of all state and non-state actors involved, directly or indirectly.

This is true for the status of Crimea, but becomes increasingly so with regards to Donbass and the implementation of Minsk II agreement that ought to bring peace to the troubled region. Two years after its signing, some analysts observe that “as the Minsk 2 process is now merely a self-sustaining diplomatic fiction, it has consequently become pointless; but it has also become indispensable. The present status quo and ‘neither war nor peace’ scenario is benefiting everybody, including the international community, as it justifies its lack of deeper involvement.”

“Benefits everybody”… well perhaps it is fair to say that it serves all but the ordinary citizens. And they are those who are paying the ultimate cost of the conflict. According to UN Human Rights Commissioner’s data, about ten thousand people have been killed (including two thousand civilians) and close to twenty-three-and-half thousand injured since the mid-April 2014. And it does not count the displacement, loss of jobs and hard earned property, the minimalist services and quality of life, insecurity of daily life and uncertain future, etc.

But hey… let me put it straight: people (whether human lives or their well-being) are never taken into geopolitical calculus by group actors, independently of what they claim in their public statements. Just look around… Whether we like it or not, the rule established by humankind since the dawn of civilization is that in political game, including the geopolitical game of Go, anything else but power can be sacrificed.

This article was originally posted on PolicyLabs